Many of you may be wondering why things have been quiet in the past few weeks. I have been hashing out the details of the project to a legal firm (Randazza Legal Group, well known for copyright & 1st amendment and copyright cases). This was due to a large vocal concern on the parody and legal matters inherit in the parody elements of the project. There is bad news that is really just good news. I got a large opinion piece bu I’ve snipped out the most important part.

On the whole, we believe that theoretically, the development of the Questria video game should rightfully support a finding of Fair Use. Unfortunately, I believe that the weight of legal precedent would tilt against a finding of Fair Use, and that if the copyright owners of My Little Pony were to sue, they would prevail.There is transformative use of the My Little Pony series. However, the video game also borrows protectable elements of the original work and is not, at least as presently conceived, a parody of My Little Pony. One of the challenges in a Fair Use case is that Fair User rulings are highly unpredictable, and based on experience, it has taken discovery and some degree of factual development before courts will be comfortable granting summary judgment on a Fair Use defense. There does appear to be a trend in the law that courts are increasingly comfortable granting Fair Use on a limited record.Nevertheless, given the rulings in Re (JK Rowling) and Castle Rock cases, I believe that a Fair Use defense would have a less than 50% chance of success.

This is not to say that is would be hopeless, but I would be certain that you have adequate insurance policies in place to defend you in the case of an infringement claim. Alternatively, we could increase your likelihood of successfully employing a Fair Use before by increasing the level of critique of the original, as well as other elements of the proposed game. Somewhat illogically, the less subtle the reference to the original, the stronger the Fair Use defense.

Accordingly, you may wish to add some conceptual elements to the game that make fun of the original more, or that make a true critique thereof. (1)

“We are highly experienced in the confluence of First Amendment law and intellectual property law. We have handled complex and high profile matters in both areas, and often are brought in by other law firms seeking a highly specialized eye on these matters.” – Marc John Randazza

Questria is hitting most transformative bases but the most important one; commentary. This means we are not making enough of a statement on the show, its premise, the fans or any other elements from the my little pony universe. The apple.mov series is protected under parody because it uses the style of the show to make a point about the show. Questria in its current form does not.

“Somewhat illogically, the less subtle the reference to the original, the stronger the Fair Use defense.”

Considering this legal advice; Questria: Princess Destiny will now employ humor and make commentary based on the brony culture and My Little Pony to be considered under Fair Use. This would thrust the game into the same level of commentary that you have been accustomed to with Spaceballs, Garbage Pail Kids, Mad Magazine and EgoRaptor cartoons.

The project is very near funding end, final funding cost it is still possible! That said, alternatives to fully funded project will be discussed once the project expires;   will want to hear from all of you on how to proceed forward on future projects.

Thanks for supporting Questria: Princess Destiny! 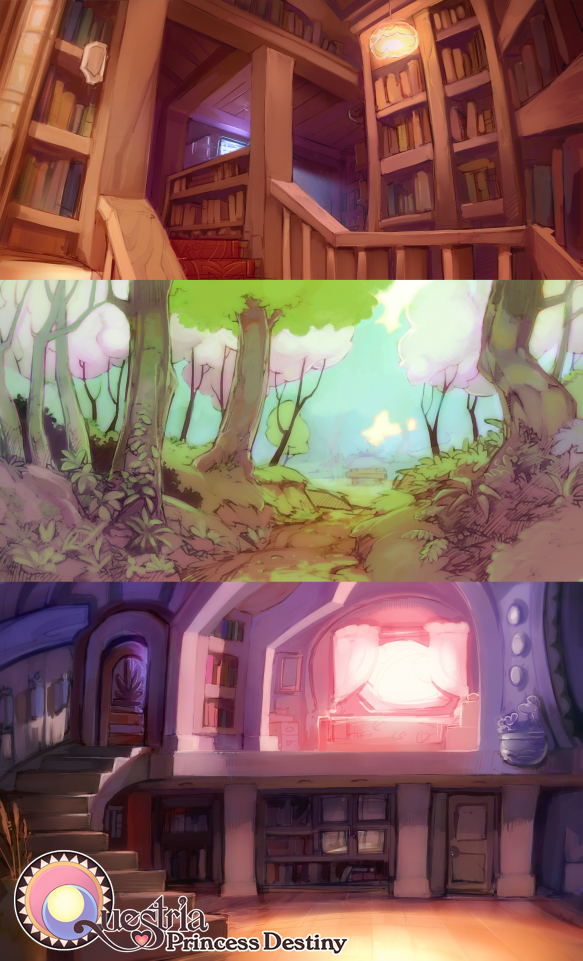 I felt it would be neat to share some of the BG art for those who wanted to see it less obstructed!

News & Updates: Updated the video to a new HQ version & altered some of the characters appearance.

FAQS
Q:What happens to my money if the project fails?
A:If we don’t achieve our base goal of 60k, we’ll most likely contact all supporters and discuss options. The mosty likely option is to take the engine, the content and build a much simpler game that can better fit into the support funds. An other option is to rebuild a new demo and pitch again as game variation or a new one (and maintain your support level). You will be part of this process.

Q: Can I get a refund?
A: Absolutely. As soon as the project expires anyone who wants a refund can get one no questions asked!

Q: Is this how the game will look?
A: Video content is not final! We are very interested in working with supporters for the final look! 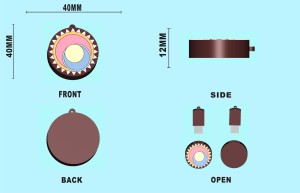 First Pass at the USB key going to try to round corners.

We have spent tons of time and effort on crafting this game and with your pledges and our hard work we can bring the game to you and the rest of the world.

The game breaks up into 2 major components. Increasing your stats through daily activities and interacting socially with the residents of Questria. Discover how well you did and what you eventually become on your 20th birthday.

In case you weren’t paying attention: You do not directly control the main character in Questria: Princess Destiny. Instead you play as Sirelestia, ruler of Questria; you enact policies and decrees to help guide the princess-in-waiting’s choices. If you are too soft she’ll become lazy and belligerent. If you are too hard she’ll become resentful and perhaps even run away! (from your lame-ass)

Supergamedev is proud present Questria: Princess Destiny as its first official game. A collaboration of talented folks including game designers, artists, coders and sound engineers who’ve come together to create a truly lovable and endearing experience.